Have you heard of Cadbury Caramilk? It was a delicious caramel white chocolate craze within Australia 20 years ago before being discontinued. The popular foodstuff made news when it had a limited revival in New Zealand, with savvy Kiwi shoppers selling it at a sizeable profit to desperate Australians. 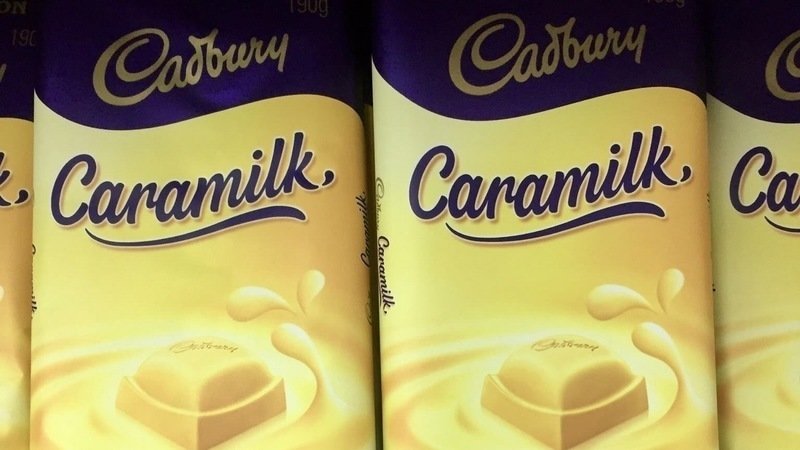 Caramilk hit Australian shelves officially in February, albeit for a special, limited run. Availability was already scarce but was made worse by an immediate recall after pieces of industrial plastic from the manufacturing equipment were found within some of the cult-like chocolate.

No Caramilk was to be found! I scoured supermarket shelves – ok, let’s not kid ourselves, I don’t spend a lot of time shopping, so I didn’t look too hard but thought about it now and then. Nevertheless, all I saw were either an empty “Caramilk” display, along with a recall notice or simply no mention or gap whatsoever.

I emailed Mondelez International, the parent company of Cadbury, to ask if another, ideally plastic-free, batch would be released. They replied no, they were not making any more, and all they did make had been distributed. They gave me national numbers for Coles and Woolworths and suggested phoning them.

Thank you for contacting us about Cadbury Caramilk!

Cadbury Caramilk is still available for purchase in Australia from Coles, Woolworths and Independent supermarkets until sold out.

For more specific information about where to purchase Caramilk from in your local area we would recommend phoning the supermarket advisory lines for further details: Coles 1800 061 562 or Woolworths 1300 767 969.

Please note that all Caramilk stock has been distributed to stores across Australia.  As Caramilk was released as a Limited Edition line we do not have plans currently to recommence production of this product.

I approached Coles first, using the tried-and-tested alphabetical order method of decision-making. A friendly lady told me one store in my region showed three bars in stock! However, she added, that figure may be out-of-date because, apparently, a mega-corporation doesn’t have real-time inventory tracking. She called the store but nobody bothered answering so it rang out and could not confirm if this quantity was current. Nevertheless, I tried my luck and as you might expect the shelf was empty. I would wager any three in stock were long gone weeks prior.

Meanwhile, Coles Online showed (and still shows) bars available for $5.50 each, limited to 12 per customer, tantalisingly saying “Add to cart.” Trying to actually add the chocolatey goodness to your cart prompts you to sign up, which I did, confirming my email address, setting a password, and then being told “This is out of stock” – would it have killed you, Coles, to put that on the product page like Woolworths does?

There seemed no point phoning Woolworths; it’s a given Caramilk is not for sale in any retail outlet in Australia. What does one do now? Desperate times call for desperate measures so I searched Gumtree, the free online classifieds site where I can only assume buyers are either deluded or think any technology for sale is stolen based on the oh-too-many emails I get when I list my second-hand phone offering “I’ll give you $20 cash !!!” (what else would they pay with?) and even believing their delusional offer to be so awesome that I will even throw in free delivery to snap up this wonderous and princely sum.

It’s quite possible Obi-Wan had Gumtree in mind when he said, “you’ll never find a more wretched hive of scum and villainy.”

Still, Gumtree it was – and I found “Emily” selling Caramilk bars for $10 in my nearby area. She was happy to keep asking if I’d like more and more bars, but somewhat shy on confirming it was not the plastic-infested recalled chocolate, or indeed, that it was actually Caramilk at all.

Emily stopped replying, so I guess her ethics prevented her from lying about selling contaminated food.

So, back to square one. With no Caramilk available, I searched for importers of Nestle Caramac, a British confectionery, which apparently tastes just the same, but found that a dead-end.

It now got serious: I turned to the option I never thought would happen. I realised if I was going to have – and share – Caramilk, I needed to make it myself.

A Paris-based American chef, with many accolades for his desserts, named David Lebovitz describes how to make “caramelized white chocolate”, and his recipe appeared simple enough for a person who has no business in a kitchen like me.

Lebovitz says to use white chocolate with more than 30% cocoa content for the best result. This was a little tricky because many of the white chocolate bars on supermarket shelves don’t divulge this detail. I selected Lindt Excellence Extra Silky 100g which says it has a minimum of 30% cocoa solids. The recipe also calls for a “pinch” of flaky sea salt so I picked up some too.

Cooking time approaching, I needed inspiration and turned to my bevvy of smart home assistants to inspire me with a rousing montage of cooking music.

First task: preheat the oven to 120 degrees Celsius. What do these symbols even mean?

The first option seemed to do the trick.

Yep … so far so good! I even took out the grill and baking trays so I wouldn’t get a grill smell on the chocolate. Who said you can’t learn kitchen tips from this technology blog?

The recipe called for 340g of white chocolate and I had 400g. Fortunately, the bars were divided into 10 squares so that made measuring it out a no-brainer. Mind you, while unwrapping the chocolate and enjoying its scent and appearance I was mildly tempted to just eat the white chocolate and be done with it all, but I persevered.

Oops! Somehow one of my six spare pieces got eaten!

Into the oven for the first 10 minutes – “Alexa, set a timer for 10 minutes” I barked, like Captain Kirk, controlling my own starship of an oven and smart home assistant. She obliged. The eventual alarm was a puny beeping, but it worked.

I could see the chocolate had softened up.

I was supposed to “spread it” so I gave it a quick once-over with the spatula.

Well, it looks less like blocks, but maybe I should have left it alone. You can see where I wiped the spatula a few times.

10 minutes later, I removed the mix again. It was still very blocky. I considered my earlier idea of “coarse” was clearly too coarse, and the recipe perhaps meant something much more broken up. So, I made a big effort to turn all the chunks into a smooth chocolatey spread, and used a knife to redistribute my earlier scrapings. Then back into the oven for 10 minutes …

10 minutes later I had an interesting coloured mix.

Playing with the spatula revealed a darker colour under the surface. Maybe I really can do this cooking thing after all !! Is this caramelised chocolate on its way ??

Back in the oven for 10 minutes.

Woah what the heck? This time its turned into rocks.

How can I leave a bar of chocolate in my pants or car and it melts, but if I leave it in the oven it turns into rocks ?

Why did I even think this was a good idea and in the realm of my capabilities? Here’s the moment I began re-considering my every life choice that led to this moment of time.

Let’s see if salt helps. That’s meant to be added, and the recipe does say the chocolate may be lumpy, and that’s ok – simply keep stirring. Now, the recipe also says uses a “pinch” of flakey sea salt, and specifically a “good pinch”. Which is it? A pinch implies not much, a good pinch implies a generous amount of “pinch”. Why can’t people just say two grams or whatever it may be? So, I added some salt. What do you think? Is this a good pinch?

I stirred it all in and put it back in the oven for a final 10 minutes.

Under the light of the oven, it looks like a delicious piece of lasagne.

Here is the final result. You know, it’s not a liquid as I assumed it would be, but it really does look like it may actually be chocolate! Somehow a few pieces accidentally fell into my mouth and despite appearances, it tasted pretty good. Success!

The recipe says “if lumpy, scrape it into a bowl and smooth it out with an immersion blender, or in a food processor” and fortunately there was a Thermomix right at hand.

And here we are! I poured it into a handy Tupperware container I found in the cupboard that looked like it was designed to make chocolate eggs, though I later learned was a FridgeSmart onion keeper. Maybe a chocolate onion should be a thing?

I didn’t lack for people willing to taste-test my Caramilk experiment. The feedback is it is deliciously flavoursome, with a salted caramel flavour and not as sickly-sweet as Caramilk could be. It was well-received and now maybe I have a second recipe beyond vegemite toast in my kitchen repertoire.

For now, back to some comfortable, relaxing SQL …

3 Replies to “I couldn’t find Caramilk so I made some, yes me.”